People often  say that artists suffer for their art. This is a  short re cap of a  painful  lesson I learned recently.

In preparing for our July 3rd Thursday event at the Seattle Design Center I was working overtime trying to get a few last minute projects ready for the show. To understand what happened I need to back up just a bit.

It was Thursday July 12 and a friend came over and helped me clean out my closet. I have some awesome cotton shirts that were in less than perfect condition and my friend suggested that I toss them out. I decided to  keep one as it was  my favorite and since it was  cotton as I could wear it to work in.

Now you might be thinking oh no,  I know where this is going and you are probably correct.

Later that day I was  trying to get things finished up and I had that awesome shirt on that my friend had suggested I toss out.I needed to do some welding so I stuck my long sleeve shirt over the top and buttoned the top three buttons to keep from getting any flash burn on my neck.

I was working away and tipped the piece upside down to do a few more welds.  I was  kneeling on the ground and since a lot of my art supplies are old car parts I am used to having some of my pieces burn off old grease so a flame now and then does not usually surprise me. However, I am not used to having flames shoot up 2  feet over my helmet. Apparently cotton made outside the United States is not really cotton. My favorite shirt went up in flames. I yelled, Fire! Fire! Fire! Lucky  for me I had a  friend helping me out and he came running and managed to help put me out. I asked my friend to help  get the  tools  put away then I  told him I  think I better go to the hospital. 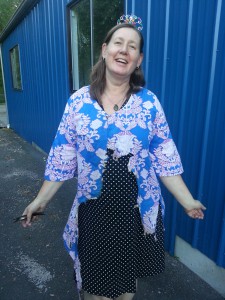 By the time I reached the ER my husband had already checked me in and I was taken back to a room right away. On the way to the room I did apologize for not being more prepared for bikini season as I had not planned to be walking around in my bra. The male nurse did not seem to have much of a sense of humor.

Three hours at the ER with a nice pain med IV, the staff cleaned my wounds. I had third degree burns from my panty line to just below my breasts. It would have been so much worse if I had not had the 2nd shirt on as it worked to block the fire.
Friends have told me, “You need to invest in leathers.” I have had to admit that I already own leathers. I had them covering some parts of the art so that it would not get hit with sparks! Another friend told me, that the healing begins when you figure out that your body needs protecting not your art.

I did go back to my shop a  few days  later and finish the piece I was working on for the July 18th  show. While there I modeled my old favorite shirt. ( see above photo)

The finished pieces are  currently in the window of  Gallery ( Context) suite  262 at  Seattle Design Center.

I don’t think I will be starting anything new until the burns heal.