As long as I can remember I have loved to try new things. When  I see someone doing something that looks fun I  want to  try it too. Sewing , welding , painting,  new jobs,  cross country bike rides, flying the list goes on.  Painting is  one of  the  newest things I have  been having  fun with.  Since I  have  always liked to  try new things and  tend to be a bit fearless I had never really thought that some people  do not like to  try new things, they do not like to be out side of their  comfort zone. Some people  stay at the  same job for  20 or 30 years!  Some  people are so afraid of making a mistake that they  don’t try  anything. I have an  adult  child like this and I wish I knew how to help them to move  forward. I cannot imagine being afraid to fail as I have learned the most from my failures and learned  very little from my successes.   The  below  painting  is inspired  by this  topic as  I want to  learn how to teach someone to  fly to  let them see that the  cell door is open and they are free to fly,  I am concerned that  some how  without  realizing it I have  clipped their wings. . . Jail Bird, is 14 x 11 x .8 . Acrylic $75 the  texture is  lots and  lots of paint. 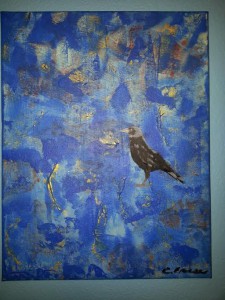 and for  something really  new,  last week I  drove 200 miles each way to take a  fun class with a friend. ( I am in the  upper  right hand corner) 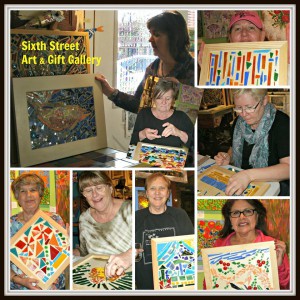 “It is common sense to take a method and try it. If it fails, admit it frankly and try another. But above all, try something.”
– Franklin D. Roosevelt

Four-term American president Franklin Delano Roosevelt, known as FDR, pulled America out of the Great Depression and led the country during World War II. He was born in New York on January 30, 1882. His political career halted when a bout of polio paralyzed him from the waist down, but after learning to walk with leg braces, he became governor of New York and then president. His New Deal initiatives included Social Security, jobs programs, and collective bargaining. He died on April 12, 1945.