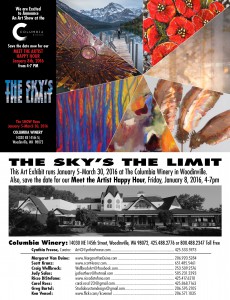 Join us for the meet the artist reception this Friday January 8th 2016, from 4-7 PM at Columbia Winery!
Feathers By,Cynthia Freese

“Action is the antidote to despair.”
– Joan Baez
About Joan Baez
American singer Joan Baez, known for her clear soprano and her belief in music as a tool for change, is widely considered the godmother of modern folk-rock. She was born in New York in 1941. She is an ardent activist, working for civil rights, nonviolence, and worker’s rights. She received the ACLU’s Earl Warren Award for her commitment to international human rights and, at the 2007 Grammy’s, was honored with a Lifetime Achievement Award. Her music includes the chart-topping version of “The Night They Drove Old Dixie Down” and the album Diamonds and Rust. She has one son.