As spring approaches I have been back in the workshop. I am currently making some fun bird baths & bottle trees. Yesterday I was hoping to work on bottle trees but realized I was out of rebar so instead I got these two started. 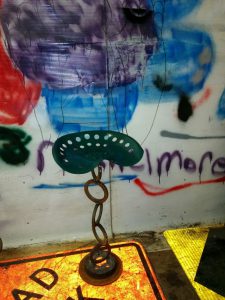 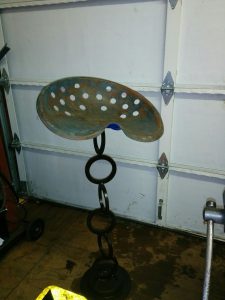 I touched up the paint on the green tractor seat and the blue seat still needs to be welded to the base and touched up.

The paint on my wall was done byan 8 year old visitor.

“Trust your own instinct. Your mistakes might as well be your own instead of someone else’s.”
– Billy Wilder
About Billy Wilder
Billy Wilder, the Austrian-American film director who gave us classic films like the farcical Some Like It Hot and the sardonic Sunset Boulevard, was a true rags-to-riches success story. Born on June 22, 1906 in the Austria-Hungarian empire, he fled the Nazi regime in 1934, arriving in Los Angeles with $11 and speaking almost no English. By the 1950’s, he had become one of Hollywood’s greatest directors, directing more than 60 films. He won six Oscars and the National Medal of Honor. He died on March 27, 2002.