Mom didn’t believe that children needed many things, and dad went along whether he agreed or not. “A nice neat simple life”, I remember them constantly saying,” We can’t have the house looking like the Romper Room now can we?” I was told from the time I was a small child that it just wasn’t healthy to get attached to material things. Doing so was an outright sin as well as being considered greedy.

The closer it got to my ninth birthday the worse I felt. The pain in my stomach was so bad I was sure that it felt just like someone was stabbing me with a knife. Later I learned that was not what being stabbed felt like at all but we won’t go into that here. I knew that if I were to die at that minute I would go straight to the burning pits of hell for what I was thinking about doing was certainly a huge sin.

Every year a week before my birthday my parents would come to my room with a box, I was to put all the gifts from my previous birthday into the box. I would have about an hour to do this chore. After placing everything into the box my parents and I would go over a list of charities that were collecting toys for less fortunate children. Once we had picked one my parents would call and set up an appointment for us to deliver them. I never really minded this family tradition, until my ninth birthday.

Great Grandma La Gra had given Molly to me the previous year. Molly was the perfect friend. She was about 15 inches tall with long straight, dishwater blonde hair. Her skin was like porcelain even though she was made of plastic. Her lips were painted a soft pastel shade of pink. Her cheeks were flushed as if she were just kissed by a cool sweet breeze. Molly’s dress was white cotton with little pink roses on it. She wore bobby socks and little white sandals. She was not an expensive doll but Molly was more than just a stupid toy. Molly was my best friend. Oh how I loved Molly, I really didn’t want to put her in the box.

The box sat outside my bedroom door for a couple of days. I had put a few of my other gifts from the previous year inside the box carefully. Then I hid Molly and when asked about her whereabouts I lied! I told my parents I had not seen her  and that I was concerned that she had run away.

After a fifteen minute lecture that seemed more like three hours on the topic of how children today don’t take care of things. I thought I was off the hook and that they would move on. I was so wrong! Dear ol’ mom offered to go help me find the missing doll. My heart dropped all the way to my big toe. I thought for sure I was going to vomit. I can honestly say I don’t think I ever felt so panicked! What does one do when cornered,confess sins or keep  your mouth shut? Mom would find Molly in minutes and she did. Molly was now in the box and it was time to take the box to the children’s hospital.

I remember thinking on the drive to the hospital that I would rather give a kidney or any other part of my body that someone should use if I could only keep my bestfriend. I knew it was pointless to argue. Once we arrived at the hospital I asked if I could give Molly to someone myself. My parents agreed as long as I promised not to pull anything stunts. If I could have donated my parents to charity on that hot summer day in late June , there is not a doubt in my mind that I would have.

I walked from room to room visiting children passing out the items in the box. All that was left was Molly. I walked into a room where there was a girl about my age. She looked scary; I quickly covered Molly’s eyes! Some horrible person had lit her on fire. She was covered with scars; it scared me to look at her. Molly whispered to me to run! That is when the girl looked at me and smiled. It was a gentle smile. When she spoke her voice was soft and scared. She asked. “What is her name?” Molly I replied. Then out of the blue I handed her my best friend and said, “I brought her to keep you company.” She smiled and took her carefully and said, “Why thank you, it has been rather lonely here and with the burns the others say I am scary. “Molly will be a faithful friend,” I told her, “just love her and she will love you back.” and then I ran out of the room. I could not believe I had just given away my best friend. My life was now over. I would die from loneliness within the hour.

Well 13 years later, I was still alive; I had not died of loneliness. I was now twenty –two married with a son. Life had gone on. I got an urgent call from my father. Someone had telephoned him with a message for me. Was an old classmate trying to locate me? I wrote the number down but I didn’t remember ever being friends with an Annie Svennson or any Ann for that matter. I stuck the paper with the number in my sweater pocket and went on about my day! Two weeks later my father called again and said, “Please call your friend, she keeps calling here for you.”

Calling people on the phone was never something I liked doing. To make a call required a lot of guts! One just never really knows what the person on the other end of the line is going to say. After a few more calls from my dad I finally decided to suck it up and give this girl a call and ask her what the heck is up! Well I dialed the number counting to 10 between dialing each number! Yep, this was back in the days where you actually dialed a phone! One ring, two ring I still had time to hang up, when I heard a man say, “Hello this is Dave Svensson,” I asked to speak with Annie and he said, “you must be Cindy, she was hoping you would call” I explained that I had not been called Cindy since I was a child and that he should call me Cynthia. He said, very well and told me he would go get Annie. There was a silence l and I really wanted to hang up. Then I heard a voice that was vaguely familiar, “Can you meet me  for lunch?” she asked.

Red Robin at 1:00 they really did make the best burgers, I got there right on time and was starving! I told the hostess I was expecting to meet someone. The hostess asked me my name and then she told me my party was waiting for me. As I walked towards the table I stopped short. My feet wouldn’t move. Oh my GOD! There she was, not Annie but Molly! I slowly made my way across the room to the table and stood in amazement and just starred. The hostess handed me a letter. Unable to speak I stood  there as still as a statue in shock. She looked just like I remembered. How did she find me? I picked her up to look at her and in my state of shock I forgot about the letter.

A few minutes later a waiter stopped and asked if I was ready to order. “Order, order what?” I asked.

I picked up Molly and the letter and went out to my car. I sat staring at the envelope. It was off white with a bit of lace. On the back it had a wax stamp seal. It smelled like Lily of the valley.

I carefully opened the envelope and on the inside was a letter written on a perfumed piece of Victorian style stationary. Dear Cindy, Thank you for sharing your best friend with me when no one else would be my friend. I enjoyed her company and I think she enjoyed mine. I have a husband and my own daughter now so I thought I should return her to you. I noticed many years ago that on the inside of Molly’s dress in dark pencil were the words , if lost please return to Cindy at WA2-4917. Cindy if you want to hear about some of the adventures that Molly and I shared give me a call at LE7 -1928.

The story of Annie and Molly doesn’t end here. I wanted to hear about the adventures they shared and for three years we were the best of friends. Three years was all we had as Leukemia took Annie away from me. This time the pain was much worse  and felt much closer to being stabbed in the stomach and the heart.

To comfort Annie’s  5 year old daughter Christina I  once again parted with Molly. I told Christina that Molly was an old friend of her moms, a great listener and that she would be her friend through thick and thin. Christina was delighted to have a friend that had shared so much of her mom’s life. For a year I spent almost every day with Christina, playing and sharing stories with her that her mom had shared with me. A year was all we had when Leukemia also took Christina.

I have kept Annie’s  journal about the adventures of Molly and I have my own journals that I try not to  open often as the pain of the memories seeps through the pages and I can still feel the pain  as if I had been stabbed yesterday.

When birthdays roll around and I see gifts in boxes I am  instantly reminded of the dreaded birthday box and all the friends and family I have lost over the years. It took some losses to learn that time with people we love and care for is  much better than any gift that comes in a box or a bag.  As for Molly she has a prominent place on the top of my bookshelf and I  still tell her all my secrets. 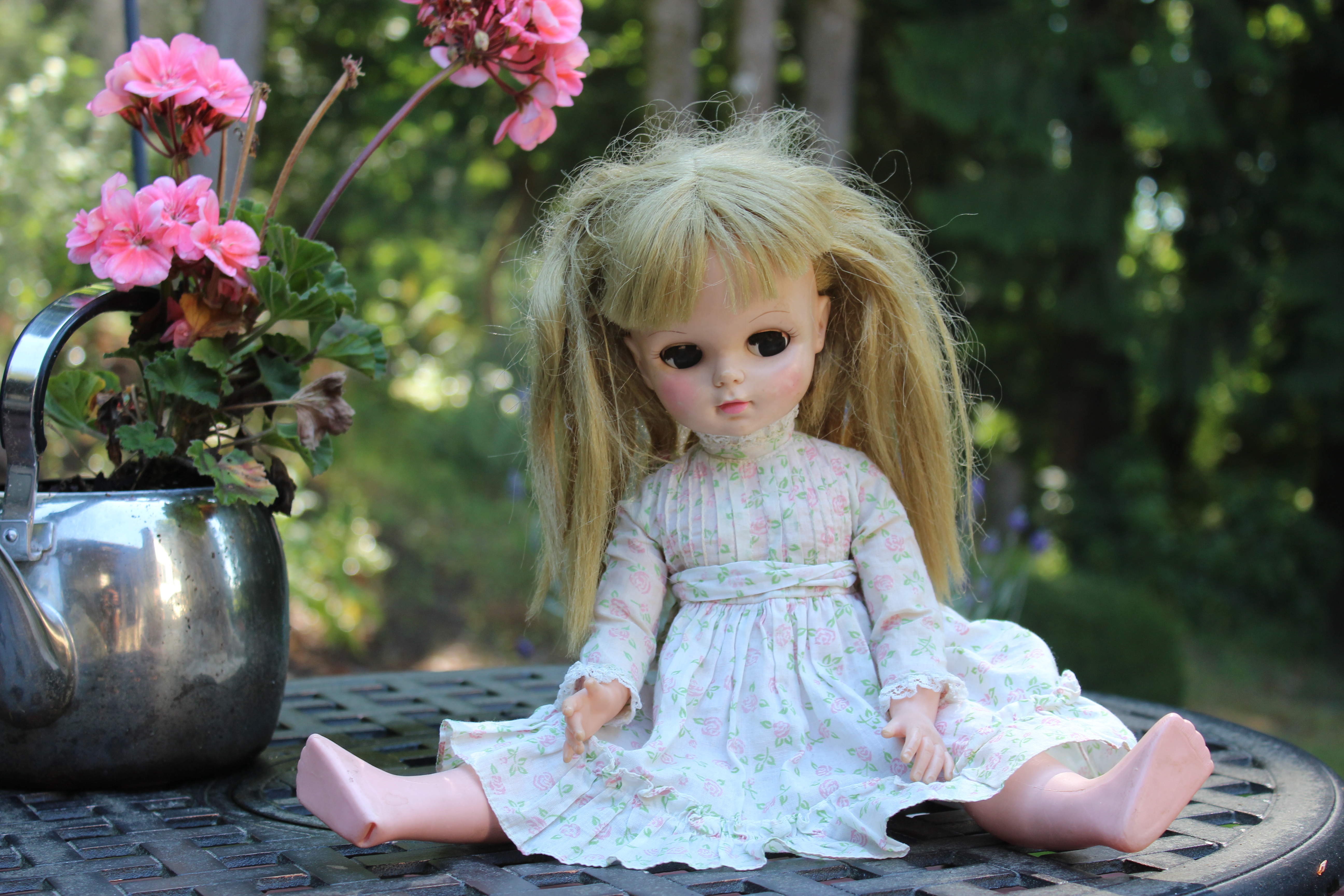