Back in elementary school my friends used to tease me for being such a worry wart. I wanted to be a half an hour early to every place I went. I was always worried that my watch would be slow and I might be late so I connected two watches together. I wore these watches from 3 grade until I was 21 years old! The bands have been replaced a half dozen times and the watches still work. I have recently learned that worrying about things I have no control over is not a good use of my time or energy. 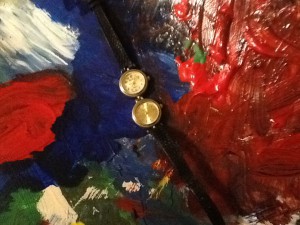 “A day of worry is more exhausting than a week of work.”
– John Lubbock
About John Lubbock
John Lubbock, the multifaceted British banker, statesman, and scientist, was responsible for the institution of England’s monthly Bank Holidays, sometimes referred to as St. Lubbock Days. He was born in 1834 in England. Growing up, he learned science from his father’s friend Charles Darwin. He coined the terms Paleolithic and Neolithic to denote the different Stone Ages, and he wrote the well-regarded books Prehistoric Times and Ants, Bees, and Wasps. He died in 1913.

I like to take short hikes after work to unwind and think. This week I did two quick hikes,one to Franklin Falls and another to twin falls.

Today’s Quote
“We must dare to think “unthinkable” thoughts. We must learn to explore all the options and possibilities that confront us in a complex and rapidly changing world.”
– James William Fulbright
About James William Fulbright
James William Fulbright, the US senator who represented Arkansas from 1945 to 1975, is memorialized in the Fulbright Prize, the international exchange program he created. He was born in 1905 in Missouri. As a congressman, he sponsored a resolution to form the peace-keeping organization that became the United Nations. As senator, he chaired the Foreign Relations Committee for 15 years. His book The Arrogance of Power critiques the government’s involvement in the Vietnam War. He died in 1995.

I have had 6 projects in the works for almost 6 months and I have not been very motivated to work in my shop. Today I finally finished another goose. It is going to be nice to step away from birds for awhile. 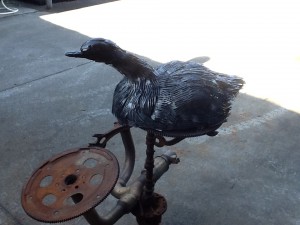 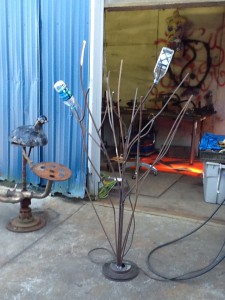 “Never be bullied into silence. Never allow yourself to be made a victim. Accept no one’s definition of your life; define yourself.”
– Harvey Fierstein
About Harvey Fierstein
Harvey Fierstein, the raspy-voiced American actor, playwright, and gay activist, is best known for his semiautobiographical play, Torch Song Trilogy, which garnered Tony Awards for writing and acting. He was born in Brooklyn in 1954. His onstage debut as a female impersonator at age 16 led to a role in a 1971 Andy Warhol play. He adapted the French show La Cage aux Folles into a Broadway musical and, later, the movie The Birdcage. He has appeared in such varied movies as Independence Day and Mrs. Doubtfire.

“Mishaps are like knives, that either serve us or cut us, as we grasp them by the blade or by the handle.”
– James Russell Lowell
About James Russell Lowell
James Russell Lowell, the sometimes romantic, often ironic American poet, was also a diplomat, serving as ambassador to Spain and, later, Britain. He was born in 1819 in Massachusetts and became known as a New England poet. His satire The Bigelow Papers was his best-known work. While a professor at Harvard, he wrote critical studies of Dante, Shakespeare, and Chaucer, among others, and also served as the founding editor of the influential magazine The Atlantic Monthly. He died in 1891.
This piece is from my runaway paint brush collection sold to private collector, Fucked Up Baby 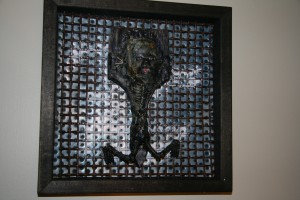 For some strange reason many people think that being an artist is glamorous.
Below are some glam shots of me working this week. 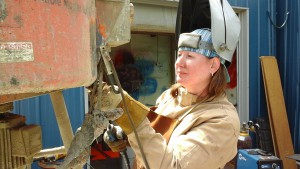 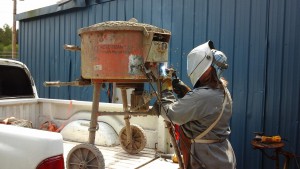 Okay, I wasn’t exactly creating art. I was patching a concrete mixing bowl for my friend at Native Stone Concrete.

“I always wondered why somebody doesn’t do something about that. Then I realized I was somebody.”
– Lily Tomlin
About Lily Tomlin
American comedian Lily Tomlin rose to fame for characters like sassy phone operator Ernestine and devilish five-year-old Edith Ann on the TV show Laugh-In. Born in 1939 in Detroit, she moved to New York after dropping out of a college pre-med track. She won a Tony Award for the hit one-woman show The Search for Signs of Intelligent Life in the Universe, written by her partner, Jane Wagner. She has also appeared in films, including Nashville and All of Me. She lives in California with Wagner.