We were pretty excited to be getting a sprinkler system installed. That was last week.
The first red flag should have been the red flags with the crew of men digging trenches before we even had a chance to ask questions. If I was writing a yelp review this company would get a Zero in communication! They could have gotten the job done on time if they had just taken a few minutes to ask me some questions.

As you look at the above photo and the two lower photos do you think it would be easier to dig along the house or along the rocks?

I even offered to move all the ferns along the house and the storage shed, I told the lead that I could have everything moved in an hour!

They preferred to dig in the rocks even after I told them that there was a drain field there. The workers are paid by the hour , I was told multiple times. I was also told they did not want to go under the walk way in the back…

Well guess what? As you get around the backside of the house there is a small flower bed so they still have to go under the side walk?

On the backside of the house they stick these little sprinklers heads up against our desk it does not make since to me especially since we are planing to extend the deck?

I have know clue why this little succulent needs its own sprinkler head? Succulents hardly need dirt or water to survive.

As I look at the above photo I am not sure why there are not raised heads in this bed as all the plants are tall?
Below you would never know that we have been working extra hard this year on your front yard and edging. So what do they do, they stick 3-4 sprinkler heads one inch in the lawn when they could have just made them 1 or 2 inches longer and not messed with the edging.

I have a seating area here and they moved the bench which was fine but then they put a sprinkler where the bench sat. I had to explain that it is there job to design the system around our landscaping not re design our landscaping. 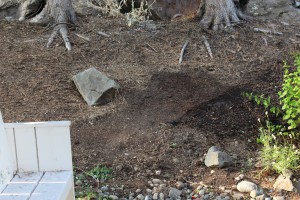 In the front our your house we had a lovely Camilla bush it was dug out and tossed in the neighbors yard we found it the next day and put it in water. Apparently we did not need to know it was being replaced with a green box.

my last rant for the nigth , only because I need to stop someplace , is this grean box that was installed right smack in the middle of my nature path. It would have been simple to come in behind the heather on the leftand have it hidden?

The good news is that the job is still in progress but now off schedule.