“We live in a fantasy world, a world of illusion. The great task in life is to find reality.”
– Iris Murdoch
About Iris Murdoch
Iris Murdoch, the acclaimed Anglo-Irish author who won a Booker Prize for her novel The Sea, The Sea, about jealousy, love, and loss, was equal parts novelist and philosopher. She was born in 1919 in Dublin. She taught moral philosophy at Oxford for 15 years and wrote the influential book The Sovereignty of Good. Her fiction often used Gothic elements to tell stories with a philosophical theme. She died of Alzheimer’s in 1999. Her life was the subject of the movie Iris, starring Judi Dench.

I took a friend who has had a bit of cabin fever for a short walk this week. We danced to the music made by the rain! https://www.youtube.com/watch?v=LcpjnRy7avI Now I want rain drums in my backyard! ! In this short 1 minute and 50 second video you will see my friend Laura. A year and a half ago Laura suffered two brain aneurysms and a stroke , she has had to teach herself to do pretty much everything over again. From walking to talking to dressing herself and feeding herself.She is nit able to drive or go to work yet however she is painting. Laura likes to send paintings to people who donate $100 to her go fund me campaign.http://www.gofundme.com/saboya

“Reading is important — read between the lines. Don’t swallow everything.”
– Gwendolyn Brooks
About Gwendolyn Brooks
In 1950, poet Gwendolyn Brooks became the first African-American awarded a Pulitzer Prize. She was born in 1917 in Kansas and grew up in Chicago. Her poetry often evokes the environment of Chicago’s tough South Side neighborhood. In later years her work became more overtly political, though she continued to combine an understanding of traditional forms like sonnets and ballads with the rhythm of the blues and experimental verse. She died in 2000. 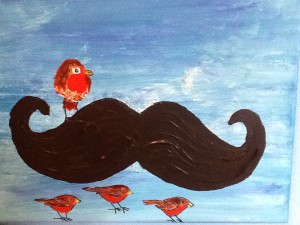 “Ever tried. Ever failed. No matter. Try again. Fail again. Fail better.”
– Samuel Beckett
About Samuel Beckett
Samuel Beckett, the absurdist Irish playwright known for his darkly funny minimalist plays like Waiting for Godot and Endgame, won the Nobel Prize in Literature in 1969 and reportedly gave away most of the money to needy artists. He was born in Dublin in 1906 and moved to France to join the resistance during World War II. His plays, poetry, and novels used elements from burlesque and vaudeville to explore the human struggle to make sense of life. He died in 1989.

This is Daisy, she started out as a garden shovel but was over worked one day and her handle broke in half.She is now retired and looking for a new garden where she can spend her time. $65 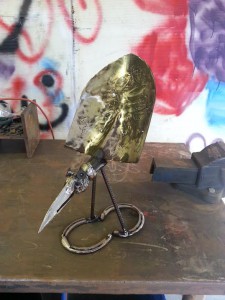 “I was always looking outside myself for strength and confidence, but it comes from within. It is there all the time.”
– Anna Freud
About Anna Freud
Austrian psychoanalyst Anna Freud was a pioneer in the field of child psychiatry; she also worked closely with her father, Sigmund Freud, in developing his theories. She was born in Vienna in 1895 and fled to London with her parents in 1938, escaping the Nazi regime. When her father became sick with cancer, she took over his studies, becoming his intellectual heir. She founded the Hampstead Clinic to work with children. She died in 1982.

We finally had a break in the weather so I got outside and worked on adding some color to the hill outside my office window. The weather has had me a bit down in the dumps so I am hopping to get back to painting or welding next week.

Today I planted the vinca, lavender and a red maple tree. We are hoping to install some rock steps to the left of where I am standing that will go up between the two tree trunks. 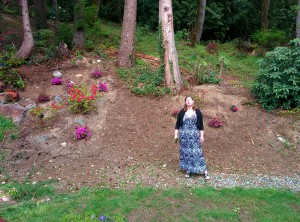 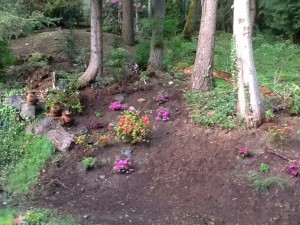 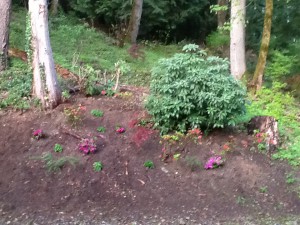 “Great minds have purposes, little minds have wishes.”
– Washington Irving
About Washington Irving
Washington Irving, known for such stories as “The Legend of Sleepy Hollow” and “Rip Van Winkle,” is considered by many the father of the American short story. He was born in New York in 1783. Although he ultimately returned to New York, he lived in Europe for 17 years, working for the US Embassy. His extensive travels through the southern and western United States led to books about his tours. He took many years to recover from the death of his fiancee in 1809 and never married. He died in 1859. 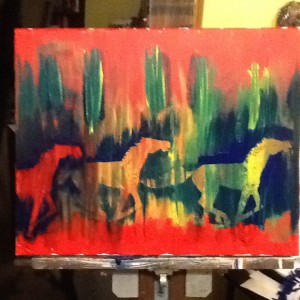 “When one’s expectations are reduced to zero, one really appreciates everything one does have.”
– Stephen Hawking
About Stephen Hawking
British scientist Stephen Hawking, best known for his book A Brief History of Time, which did much to popularize physics, is a leading theoretical physicist who used Einstein’s general theory of relativity to prove the big bang theory. He was born in 1942 in Oxford. He was diagnosed with severe amyotrophic lateral sclerosis (ALS) at 21 and was not expected to live more than three years. Over time he has become more disabled, but he continues to lecture, speaking through a computer-controlled voice box.

Twenty three years ago I bought my husband a ticket to hear Stephen lecture, on my Military salary I could only afford one ticket so I drove him out to Seattle Center we had a bite to eat and then I gave him the ticket. When he came out side he was excited to tell me all about his experience and he the question he has asked Mr Hawking. 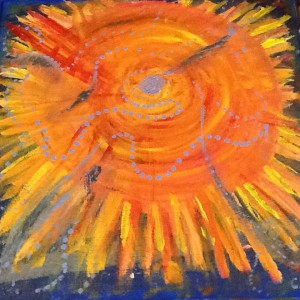 “Defensive strategy never has produced ultimate victory.”
– General Douglas MacArthur
About General Douglas MacArthur
General Douglas MacArthur, the American war hero who led forces in both World Wars, is perhaps best known for his leadership during the Korean War, when his forces pushed back the North Koreans and Chinese to their prewar boundary. He was born on January 26, 1880 to Major General Arthur MacArthur and his wife; his earliest memory was the sound of a bugle. During World War II, he was responsible for losing and retaking the Philippines. President Truman fired him in 1951 for insubordination. He died on April 5, 1964.

Lights of War, are made out of old WWII howitzer missile container cases and car parts 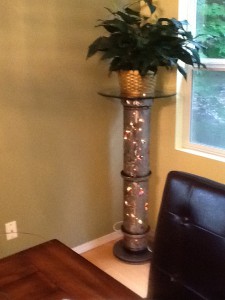 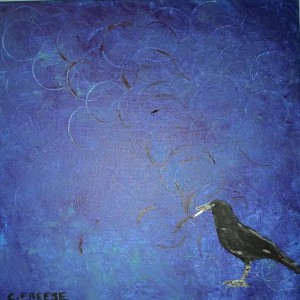 Today’s Quote
“It has been my philosophy of life that difficulties vanish when faced boldly.”
– Isaac Asimov
About Isaac Asimov
Isaac Asimov, the American author known as one of the top writers of science fiction’s golden age, penned nearly 500 fiction and nonfiction books, including the Foundation trilogy and I, Robot. Born on January 2, 1920 in Russia, he moved to the US with his parents at age three. As a teen, he would read pulp magazines in his parents’ candy store and became inspired to write his own stories. His fiction frames interesting ideas in a bare-bones narrative. He died on April 6, 1992.

This past week started out pretty crappy. I got off work at 2PM and decided to go get estimates for some paint repair on my van as the rear bumper is all scrapped up. After stopping at 2 places my shop landlord told me where to go for a good deal and quality work. he told me who to ask for, and I was told to tell them Joe sent me and to give me an awesome deal. The owner offer me an awesome deal and on the way out of his parking lot I hit an effing fire hydrant! The hydrant is okay but my front bumper now needs to be replaced. The front bumper will be more than the highest estimate for the rear bumper. ;-( I am wishing I had traded the van in when I bought the truck.pretty good note.

On a happy note two more paintings have gone off to live in Federal Way WA. 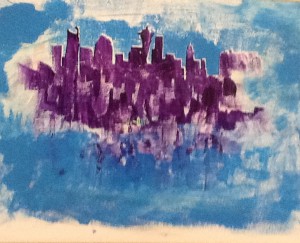 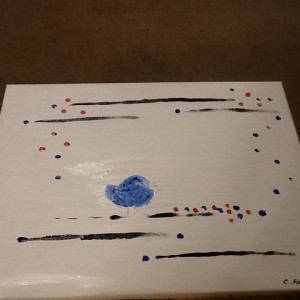 Yesterday on my way into to my day job I spotted some Super Heroes outside the Issaquah Court house! What a perfect way to end the work week! 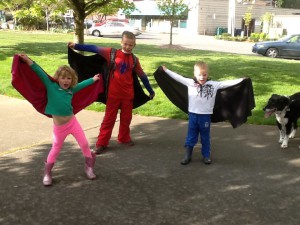 Today’s Quote
“We cannot live for ourselves alone. Our lives are connected by a thousand invisible threads, and along these sympathetic fibers, our actions run as causes and return to us as results.”
– Herman Melville
About Herman Melville
American author Herman Melville is best known for his epic whaling novel, Moby-Dick, which wasn’t recognized as a masterpiece until after his death. He was born in New York on August 1, 1819. At age 20, he went to sea on a whaling ship. His seafaring adventures included time with cannibals in the Marquesas Islands, the basis for his successful novel Typee. His later, more philosophical, novels were not as well received as his early adventure yarns, and he died in obscurity on September 28, 1891. 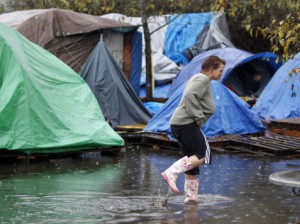 I work at the Issaquah Municipal Court House 10-20 hours a week as a security guard. The people I interact with throughout the day are often homeless people, criminals & drug addicts. I smile and say hello to each one as they enter the building and as they leave I wish them a good day. I can make sure the courtroom is safe while being pleasant at the same time. A week ago my boss came into check on me and she brought a guard to give me a break so that we could go chat privately. I was told,” We have had complaints that you are nice to these people. They are criminals,homeless and drug addicts, and did you really share girl scout cookies with them?” you are not to be nice, you are not to smile, you are not to be friendly!”
In response to this counseling I said, ” I will continue to be kind , understanding and friendly as my job description does not say I have to wear a frown and be rude, it says I will check each person to make sure that they are not bringing any weapons into the courtroom. I can do this without making these people feel any worse than they already feel. These people are at court for Christ sake and they are trying to turn their lives around why not try to lift them up instead of pushing them down.” I will admit it does feel nice to have people thank me for being kind.

Today a small group of drug addicts, criminals and homeless people invited me to have lunch with them in the park. They had gone to the food bank and picked up some snacks and so joined them in the grass and listened to their stories. After work I came home and picked up a tent that has been sitting in our garage for 10 years I went back downtown to meet one of the young families I had lunch with to give them the tent that I had told them they could have. John Ingram from Homeless Outreach was with them and was then able to transport them to the Tent City in Redmond.

I might get fired for being nice but I can live with that!

Today’s Quote
“Just don’t give up on trying to do what you really want to do. Where there is love and inspiration, I don’t think you can go wrong.”
– Ella Fitzgerald
About Ella Fitzgerald
With her three-octave range, a purity of tone, and a wonderfully expressive voice, singer Ella Fitzgerald has been called the voice of American jazz. She was born in 1917 in Virginia and began singing professionally at age 16. Her rendition of the nursery rhyme “A-Tisket, A-Tasket” launched her stardom. Her best known recordings include the Cole Porter and George Gershwin songbooks; she also toured with Duke Ellington’s band. She died in 1996.