As person who loves crafts , creating art and mixing up mediums I tend to turn my home  office into a  garage/ storage unit / work space and over all catch all.  Every few months I have to  go through  my  space and try to make sense of the things I have collected. As I  sit at my computer I swiveled my chair around and took three photos.  Oh dear, It was so nice and  tidy  just a few weeks ago!

I  hang new work where ever I can find a free spot. ( usually crooked ) 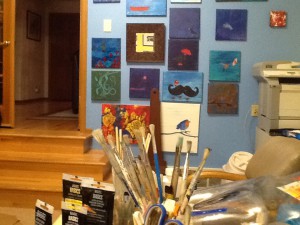 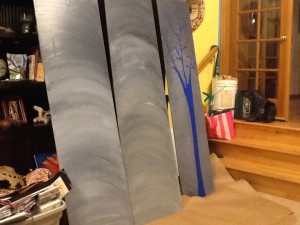 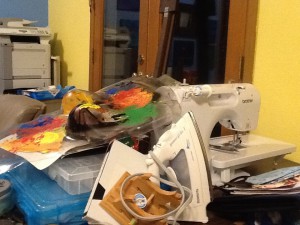 I  did  spend  about  20  minutes cleaning my metal shop today and then I  decided that was enough and went out to  breakfast with a friend.

I am  open to  suggestions on  how other artists stay organized ?

Sometimes what we think is normal  is  far from normal for someone else. I am one of those people that likes to move the furniture around every few days,and in my perfect world  everything in  the house and in the yard would be on wheels so it would  be easily moved to a new location.

I thrive on trying new things , going new places , meeting new  people and  making  lots of  mistakes. I am often happiest when I am out on a limb!   16 x 20  Acrylic, Out on a Limb 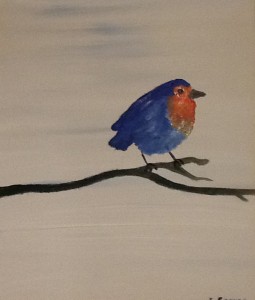 “Life is about not knowing, having to change, taking the moment and making the best of it, without knowing what’s going to happen next. Delicious ambiguity.”
– Gilda Radner

The endearingly goofy American comedian Gilda Radner was the first actor cast on “Saturday Night Live” and stayed with the show for six years, creating such beloved characters as Baba Wawa, Emily Litella, and Rosanne Rosannadanna. She was born in Detroit on June 28, 1946. After she was diagnosed with ovarian cancer in the late 1980’s, she wrote “It’s Always Something,” a book about her experiences. Her widower, Gene Wilder, founded the “Gilda’s Club” national support group after her death on May 20, 1989.